One of the Seven Wonders of the World and a monumental ode to love, Taj Mahal is a spectacular and magnificent architecture located on the banks of River Yamuna in Agra. It is a memorial of love built by the Mughal emperor Shah Jahan for his wife Mumtaz Mahal who died young while birthing his baby. Taj Mahal was built between 1631 to 1653 and houses tombs of both Mumtaz Mahal and Shah Jahan himself. It is often depicted as a white paradise owing to its façade which is entirely made of marble and the stunning garden in front of it with the river Yamuna on the backdrop, that makes it look like a magical land.

Designated as the UNESCO World Heritage Site, Taj Mahal sees an influx of visitors every year from around the world and in every season. Taj Mahal translates to the ‘Crown of Palaces’ in the Persian language which can be seen even in the reflection of this splendid spectacle in the Yamuna. The visitors are welcomed by a beautiful garden which starts at the gate and leads till the base of the edifice. There are also fountains and water channels in the entryway which makes the monument even more spectacular and a breathtaking visual. 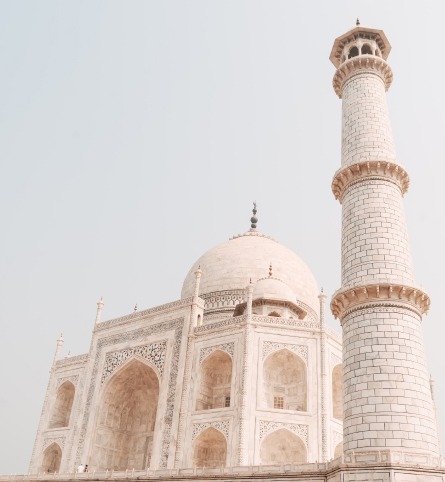 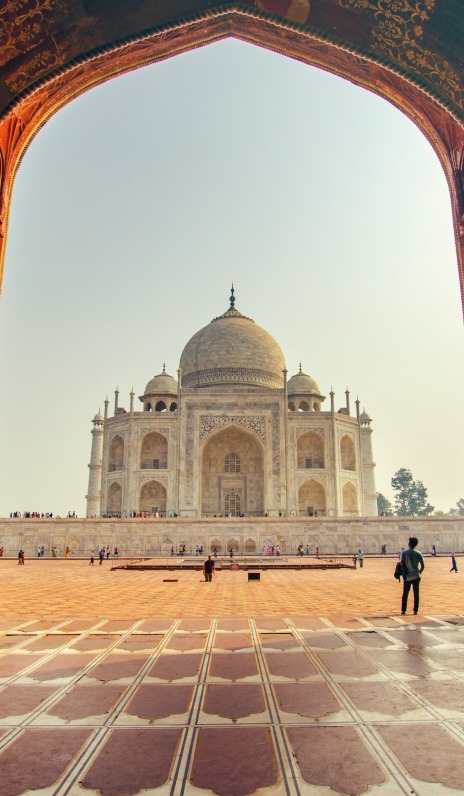 The exterior walls of the Taj Mahal are adorned with intricate carvings and inscriptions which are also white. Covering an area of 42 acres, the white marble used to make the monument was brought from Makrana in Rajasthan and it stands as a stunning symbol of India’s rich history and architectural glory. In the early 20th century under the British rule, the monument went under a major restoration project. 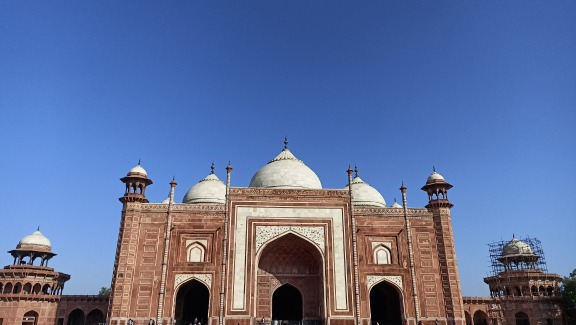 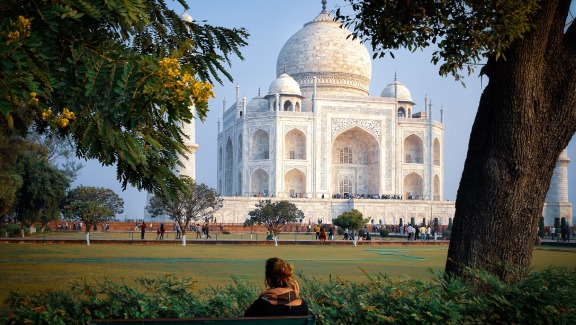 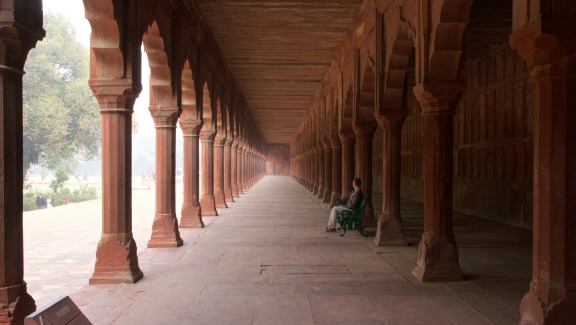 Taj Mahal is an Ode of Love dedicated by Mughal emperor Shah Jahan to his wife Mumtaz Mahal who died while giving birth to their 14th child in 1631. Her death had left the emperor heartbroken, and he thus decided to build a monument that will be remembered as a specimen of his love for his dearest wife. 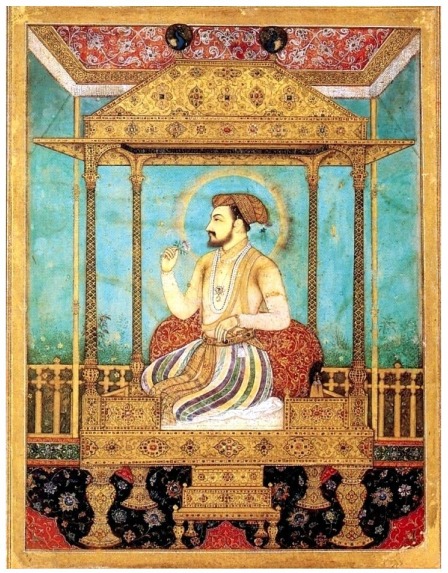 The construction of Taj Mahal began in 1632 and the main building was done within eight years while the complete complex was constructed in 1653. Over 20,000 workers including architects from all over India and Central Asia worked on this exquisite creation that we see today as one of the seven wonders. Specialists from as far away Europe were brought who made the beautiful marble screens and marble inlay (pietra dura) which is made of numerous semi-precious stones. It looks as stunning today as it did centuries ago and was designated as the UNESCO World Heritage Site in 1983.

After the construction of Taj Mahal was done, Shah Jahan was overthrown by his son Aurangzeb, and he imprisoned his father in the Agra Fort. His last years till the time he died in 1666, Shah Jahan spent his life in imprisonment and could only glimpse the marvelous creation through a window. After he died, the mortal remains of Shah Jahan were buried along side Mumtaz Mahal in Taj Mahal.

died, the mortal remains of Shah Jahan were buried along side Mumtaz Mahal in Taj Mahal.

Taj Mahal is an epic specimen of the Mughal architecture, which is an amalgamation of the Indian, Persian, and the Islamic style of architecture. Named in honor of Mumtaz Mahal, the Taj Mahal is constructed entirely out of white marble engraved with semi-precious stones (jade, crystal, lapis lazuli, amethyst, and turquoise) producing elaborate designs in a technique known as ‘pietra dura’. The central or the main dome is 240 feet high (73 meters) and is enclosed by four smaller domes with four slim minarets on all four corners. The design for Taj Mahal was created by Ustad Ahmad Lahouri, an Indian of Persian origin and more than 20,000 workers from India, Persia, Europe, and the Ottoman Empire were called to build this majestic opulence.

In the exterior walls of the arched entrances of the mausoleum and other parts of the building, verses from Quran are inscribed in calligraphy in accordance with the traditions of Islam. Inside the Taj Mahal or mausoleum, an octagon shaped marble chamber decorated with carvings and semi-precious stones houses a cenotaph, or a false tomb, of Mumtaz Mahal. The real tomb comprising her actual remains lay below, at the garden level.

The rest of the complex consists of a main gateway of red sandstone along with two others for visitors to come. A long garden divided into quarters by long pools of water and flowerbeds, a red sandstone mosque, and an identical building called a jawab (or mirror), directly across from the mosque. According to the traditional Mughal building practice, there cannot be any modifications to be made to the complex.

Taj Mahal can also be viewed at night but only on five days a month, which includes a full moon night and two nights before and after the full moon. All these aspects, the dates and the timings are decided by the Archaeological Survey of India. Witnessing Taj Mahal at night is a mesmerizing sight, one that cannot be captured in words or a photoshoot. Viewing at night takes place between 8:30pm to 12:30am in 8 batches of about 50 people for about 30 minutes each. Thus, only 400 people are allowed in one night. 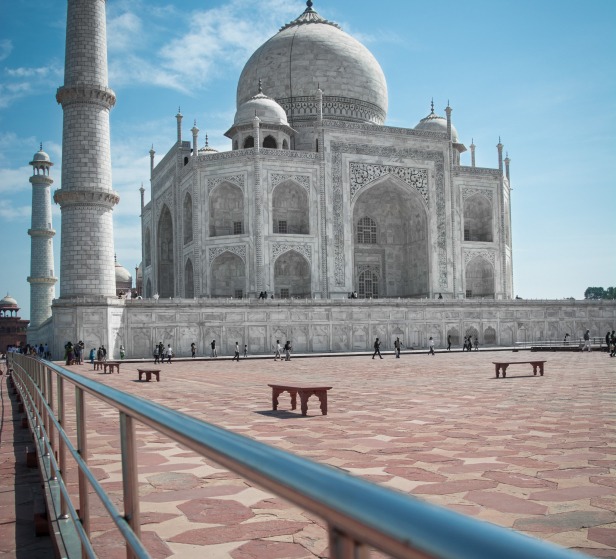 scheduled timing at the Shilpagram complex. Visitors can only view the Taj Mahal from a distance and are not allowed
inside the monument. Video cameras are not allowed inside the gate when the night viewing starts. 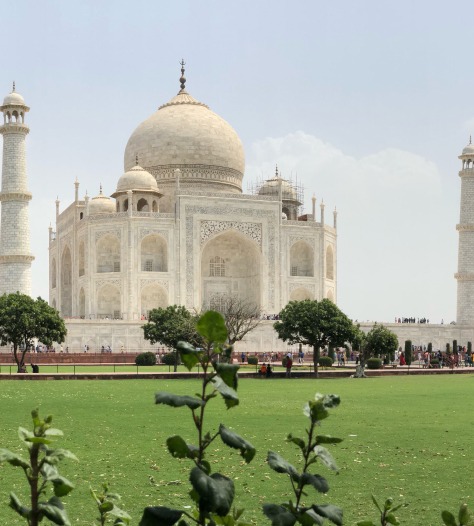 One of the prevalent and leading highlights of Taj Mahal is its garden that starts from the entryway and reaches to the base of the mausoleum. Popularly known as ‘Paradise Garden’, the concept of this garden was brought in by Babur which is built in the Persian Timurid style and unique in its usage of the number 4 and its multiples. This element was added as number 4 is considered the holiest in Islam.

The garden is a beautiful spectacle of greenery and decorative bushes adorning the sides. It is divided into four parts with two marble canals decked with fountains dominating the center. Every quarter portion of the garden has 16 flowerbeds with 400 green and flower plants each. The enchanting Taj Garden is abundant with lush trees, flowers, fruits, chirping birds, and symmetry, depicting the abstract meaning of paradise. The strike contrast of the lush green bounty from the white façade of the Taj Mahal makes for a wonderful backdrop for some stunning shots.

Effects of Pollution in Taj Mahal

Air pollution affecting the entire globe and the pollution from nearby factories and vehicles poses a major threat to the gleaming exterior of Taj Mahal. After it was observed that the exterior of the monument is starting to turn slightly yellowish due to acid rain caused by pollution, the Supreme Court ordered several anti-pollution measures to protect the monument from deterioration in 1998. Some factories in the vicinity were shut down or shifted while regular traffic has been banned to come near the monument since then. Only battery-operated rickshaws and cycles rickshaws are allowed in the area.

Taj Mahal information is given below:

Automobiles are not allowed near Taj Mahal due to precautionary measures. You can get battery operated rickshaws and cycle rickshaws from the parking spot or you can walk to the Taj Mahal which is just a few minutes’ walk.

Where is Taj Mahal located?

Taj Mahal is situated in Agra, Uttar Pradesh, on the banks of river Yamuna.

What is the height of Taj Mahal in feet?

The central dome of Taj Mahal is 240 feet high.

Can we go inside Taj Mahal at night?

No, visitors are not allowed to enter the complex at night viewing, and they can only see the monument from a distance.

When was Taj Mahal built and who built it?

What is inside the Taj Mahal?

Inside the Taj Mahal are:

How many gates are there to enter Taj Mahal?

There are three gates – The Western Gate (main gate), the Eastern Gate, and the Southern Gate (only exit).